The Truth Behind the “Foreign Fighters are Terrorists” Trick

Posted by: Bilal Abdul Kareem in Articles July 25, 2014 Comments Off on The Truth Behind the “Foreign Fighters are Terrorists” Trick 2131 Views

Here is a great quote about foreign fighters: “They came to us when we most needed them, during those hard and uncertain days…”.  Who made this statement?  Was it:

A. Abu Muhammad Jawlani Leader of Jabha An Nusra in Syria

B. Hassan Abboud Political Leader of Jabha Islamiyya in Syria

If you said D you were correct!  The full statement was: “They came to us when we most needed them, during those hard and uncertain days of our 1948 war of independence.”  More than 4,000 foreign fighters from all over the world participated in attacks in Palestine in those days.  That certainly is an interesting statement given how governments around the world today have branded any foreign Islamic fighter as a terrorist as a general rule and the news media has been too happy to give them a well edited platform to place fear in the hearts of the people.  But I’m jumping to conclusion here.

Let’s go back to early 2013, the Syria government was in serious peril.  The resistance was taking over towns with amazing speed.  The once feared Syrian Intelligence machine was in ruins.  Actually many of their agents who once walked the streets of Aleppo and Homs with impunity were now in hiding or they were a part of some Mujahid’s video highlight reel.  As I was there at that time I could see the changes happening: the country was at risk of falling into the hands of Islamist fighters, although only about 10% of the fighters were foreign their presence was more like 50%.  Foreign fighters were an extremely fierce lot as many of them never expected to survive the war, their tactics were something the Syrian government had never seen before and were unprepared to stop.  When the Free Syrian Army wanted to attack a base they would call foreign commanders who had come from Chechnya, Algeria, the UK, US, and many other places to lead the charge because they knew and would say: “They came here to die”.  It was a difficult pill for many governments around the world to swallow.  They really wanted Bashar’s government to fall but they hedged their bets on the Free Syrian Army, another secular outfit, to take over.  Islamic fighters had another idea and so did the Syrian people in general.  They’d had enough of warlords in suit jackets and ties who were friendly to some foreign government somewhere and wanted something different.  Islamic governance.  You could imagine how difficult it would be for world powers to have to sit at a bargaining table with those they once tried hard to paint as terrorists and actually treat them as equals.  Something had to be done.

The foreign fighter had to be demonized, discredited, and done away with or all would be lost.  Suddenly in mid 2013 governments who were pro-rebels all of a sudden stopped talking about dead children and the “right of self governance” for the Syrian people and focused on foreign fighters exclusively.  One would think that the reasons for the war had disappeared.  Most of the talk about the murder of innocents that was happening daily was now mostly seen on youtube instead of the evening news.  All of that humanitarian crisis stuff got sent to back burner in favor of politicians warning of foreign fighters coming back home with an axe to grind.  Even some Muslims who were pro-rebel fell into the trap as well.  They started talking about how this was a “Syrian conflict” and how “…all Syrians needed was dua and cash donations” and not fighters.  It was as if foreign fighters entering the picture was an automatic international “no-no”.  Legislation was then passed to prosecute foreign fighters based upon crimes that they “might be inclined to do” upon their return.  Note: I said “MIGHT” be inclined to do.

Then we look at the ILLEGAL Israeli occupation of Palestinian lands.  It is in clear violation of international law, as the UN Human Rights Council has passed a staggering 45 resolutions against Israel since it’s creation in 2006.  Therefore by definition any and all who participate in the Israeli army are in violation of international law.  Full stop.  Or to put it another way they are terrorists.  They aren’t terrorist due to actions that they MIGHT carry out in the future, they are terrorists due to the actions they ARE carrying out day in and day out.  To this very day there is an Israeli recruitment program called the Mahal program which is very public in that it recruits foreign fighters for the Israeli Defense Force.  It is represented by 30 countries from around the world.  This is NOT a secret program, just google it or click the link above to check it out for yourself.

Unfortunately some groups in Syria started to feel the heat of international pressure to distance themselves from foreign fighters.  The rise of ISIS didn’t help but it wasn’t the only reason.  Some groups thought they would get some weapons and cash if they helped to isolate the very group that had a huge contribution towards the taking of the currently liberated territories.  The poor commanders of many of these Syrian groups who meant well didn’t realize they were dealing with experienced political sharks who wanted nothing more than to crack the foundation of the foreign fighter participation knowing the revolution would falter.  The miskeen commanders actually thought and said: “We can take it from here” meaning they could finish off Bashar.

I had a conversation with a commander of the Free Syrian Army not long ago that I will never forget:

Commander: We want the foreigners to leave the country.  ISIS is a headache for us.

Me: Agreed.  ISIS has been a thorn in everyone’s side but all foreigners are not ISIS.

Commander: I know but I think we should just get rid of all the foreigners.  This is our country and we can finish the war from here.

Me: I see.  You are currently fighting the Assad army, Russian munitions sent over by the plane load, Hizbollah fighters pouring in from Lebanon, and Iranian Revolutionary guard soldiers showing up.  Do you truly believe you can take them all on alone?

The international community has stood by and watched as foreigners bolster the Israeli military ranks and have turned a blind eye.  The joke is on the Muslims worldwide and anyone else who thought the scaremongering campaign against foreign fighters was really about their safety and fighting terror.  It wasn’t.  Everyone knows that foreign help for a desperate people breathes life into the indigenous people and galvanizes the resistance.  Yitzhak Rabin knew it too and that’s why Israel is built on the help of foreigners.  Foreign help can change the course of a people.

3 Things We learned From Putin’s “Show” against ISIS 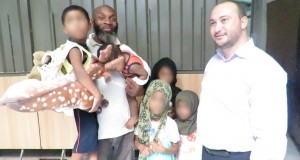 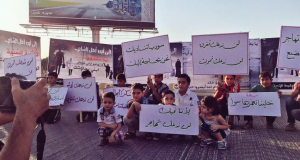