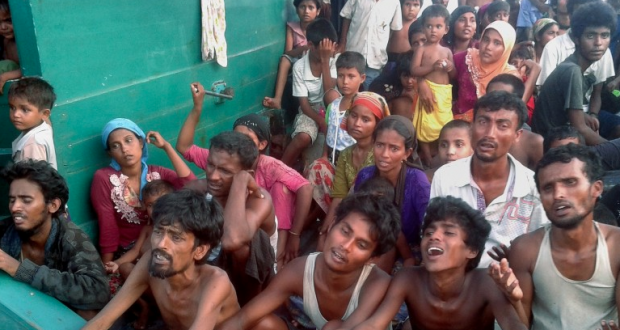 Syrian Rebels to Rohingya: Invitation for 500 Families Trapped at Sea

The situation of the Rohingya Muslims has gone on too long brothers and sisters.  Alhamdo lilaah I have been in communication with different groups inside the Syrian territory and there are logistical discussions as to how to bring 500 families from their present entrapment at sea to northern Syria to reside in a refugee camp.  Alhamdo lilaah they don’t have much to offer as the Syrian people are suffering greatly.  However as one commander mentioned: “We know full well what it is like to suffer from hunger and anxiety.  We can barely maintain what we have but as the Prophet said: ‘Food for 2 is enough for 3′.  Hopefully we can stretch it bit more, but we can’t sit by and watch our brothers and sisters die at sea and do nothing.”

Their plan is to convince Malaysian or Indonesian authorities to allow 500 families to come ashore and be escorted directly to the airport on a chartered flight to Istanbul wherein Turkish authorities would be asked to escort several chartered buses to the Turkish-Syrian border where they would be met and taken to a refugee camp on the Syrian side.

There are approximately 6,000 Rohingya trapped at sea currently and have been denied coming ashore in either Indonesia, Thailand, or Malaysia.

This shows that some of those who are fighting the regime understand that this conflict is not about land or power.  I pray to Allaah that the Malaysian, Indonesian, and Turkish authorities remove any stumbling blocks to this initiative.  I am not authorized at the moment to tell which specific groups are party to this as of yet due to the potential sensitive nature of the initiative.  However I admit I am extremely happy to hear that the screams of the Rohingya are finally being heard.   Living in a refugee camp in northern Syria is better than dying in the middle of the ocean.

If the destitute in Syria are willing to take on some of the their suffering brethren, maybe some other Muslim countries will take on some as well.

I would ask any all to make dua that these suffering people are relived of their burden.

Make dua that those who are sincerely working to make this a reality are successful and rewarded by Allaah.

Previous: Rohingya Muslims: When will the Suffering End?
Next: The Rohingya Crisis Puts the Muslims on Trial: Pass or Fail?