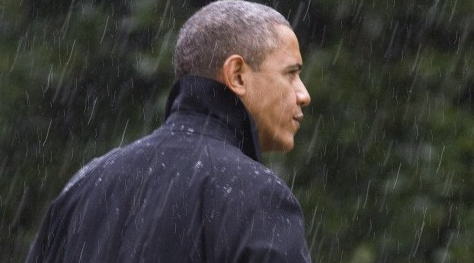 Is Obama the Real Source of Muslim Pain?

Muslims around the world are weighing in on the Obama speech. Overwhelmingly I am hearing that Muslims are angry about the potential for additional American interference in the region of Iraq and Syria. “I will not hesitate to take action against [ISIS] in Syria, as well as Iraq”, Obama said. Why are Muslims concerned? I think the answer to that should be obvious. America has succeeded in wrecking every Muslim country it goes into. Look at Afghanistan. The country is a total mess. More than 4 months after “elections” there is still no clear winner. So as America packs it’s bags and starts heading for the exits, the Afghan people are left behind to have to count the dead all on their own in anticipation of the violence to come. The Taliban have never surrendered and never stopped their drive to reclaim the country. Afghans were finally living in peace before the Americans showed up, and now 13 years later can anyone say that the American invasion was good for Afghanistan and ordinary Afghans?

How about Iraq? Do we really need to recap Iraq? More than a million Iraqis are dead as a direct result of either war or sanctions since Operation Desert Storm started. How did the Iraqis whom George Bush was supposed to liberate make out? As we said there is no need to go there. Now Obama wants more involvement. In his speech he said: “We cannot allow these communities to be driven from their ancient homelands.” Wow. How did he get that line from his chest, past his maroon tie, and into the microphone? That one had to hurt! I guess when it comes to ancient homelands the Palestinians don’t count. I guess. So now we are to believe that since the Americans are coming, things will be better? I’m at a loss for words.

Who Should be the True Target

After having said all of that, Muslims need to look at the other side of the coin. Who should we really be angry with here? Is the rightful target of our anger really the US administration? I would have to say an emphatic “NO”. I believe the true reason for Muslims to be angry lies elsewhere. If the Muslims had a greater force of God fearing soldiers who were able to sort their own problems out then not only would America not enter Muslims lands in general, but issues such as ISIS would not even become major issues to begin with. The issue starts with reality; ISIS is on a rampage. They kill Muslims and non Muslims alike. There are well documented cases of torture of not only ordinary Muslims who fell into their hands but Mujaahideen fighters as well. Pictures of ISIS fighters posing with the bearded heads of decapitated Mujahideen forces who opposed them lay on the ground like sheep heads on Eid day.

The image of the righteous fight that was taken up first by Syrian fighters and then augmented by good Muslim foreigners who came to the region has now been eclipsed by this crisis. To be fair, in spite of all of the harm ISIS has done they are indeed Muslims. Misguided, but still Muslims. That should mean, by definition, that this should be an internal affair within the confines of the Islamic world. However it isn’t. Why? Because most of the Muslims around the world fall into three categories:
A. The “I don’t care and what are you askin’ me for!”, category.
B. The “…well I guess I care but someone else will do something about it…right?”, category.
C. The “My name isn’t Muhammad, it’s Maurice (cough cough)”, category.
The reality is that the anger needs to be on all Muslims worldwide who take no responsibility for the rest of the Ummah. You can’t be in any of the above mentioned categories and then complain when Obama says that he’s on his way. For example: A righteous man has a criminal for a brother who belongs to a criminal gang. A criminal gang that has been involved in murder, theft, and kidnapping. The group is a menace to society. The righteous man tried to talk to his brother but to no avail. Eventually the local police, who are known for heavy-handed tactics, gets involved. Naturally the righteous man feels anger and sadness as he loves his brother. However his anger and sadness is directed towards himself because he is too weak to have stopped his brother using his own means. Now he watches as the police come in and make life miserable not only for his brother and his criminal gang, but for all of the people in the area as well. If only the righteous man would have had greater means at his disposal then he could have perhaps averted a further tragedy. Past all of that, in the end, the righteous man knows that letting his brother and his group run rampant was not an option.

Oppression and the Oppressor

So who should be happy that Obama wants to broaden his campaign in the region? No one, least of all Muslims. However if we are true to ourselves and recognize that the true problem is Muslim apathy, laziness, fear, and a penchant to constantly blame the west for everything under the sun, then and only then do we have a chance to pull ourselves out of our current position.

Muslim Mujaahideen fighting ISIS is an extremely bitter pill for all to swallow. Many ISIS members came to Syria to fight oppression yet somewhere along the line they became the oppressors. Is it Islamically correct for Muslims to simply sit back and watch ISIS atrocities day in and day out and do nothing? Look again at the hadeeth and tell me. Muslims have to start caring about what is happening around them and be active.

What Can You Do?

In the UK there are all sorts of draconian laws being enacted against Muslims who went to stop Bashar Assad’s oppression. Passports are being taken, innocent men and women are being jailed, Muslim humanitarian organizations are under intense fire. Where is the massive outcry that is due? Cage, a prisoner rights advocacy group based in the UK, is on the front lines of the political battle along with a few other organizations as well. Where are the other 3 million Muslims campaigning, contributing, writing articles for newspapers and websites, boycotting government products and services to get their voices heard? Where are the other UK Muslims who are supposed to stand up for their Muslim brothers who fight and get injured in Syria against Bashar Assad’s criminal regime but cannot come home to the UK for treatment for fear of imprisonment? Or are most of them feeling that the current issues are “someone else’s problem, so pass the potatoes”? If the reader of this article finds himself in any of the three above mentioned categories then he or she should know that they have absolutely no license to complain about Obama.

Previous: Face the Truth - ‘Neither Fighting ISIS nor Bashar is Ahrar’s Asham’s True Goal in Syria’
Next: A Plea to ISIS Supporters to Read the True Story of Alan Henning