Latest News
Home | Articles | Open Letter Calling for a Truce between Al Qaida, the West, and other Concerned Parties

Open Letter Calling for a Truce between Al Qaida, the West, and other Concerned Parties

As the days pass we are seeing more and more killing.  On the onside we have Obama, Cameron, and their allies.  In spite of Obama’s Nobel Peace Prize award he has participated in quite a few wars and bombing campaigns.  Yemen, Libya, Iraq, Syria, Afghanistan, and Pakistan.  None of these conflicts can be called a success story by anyones estimation.  On the other side of the divide you’ve got ISIS and their wanton display of killing and terror, Shabaab and their likes who mounted the attack on the Westgate Mall in Kenya, the always looming threat of an Al Qaida strike, and those other Muslim fighters who are fighting for various causes around the world but are not a part of Al Qaida.

Some reading this will fall into the endless trap of trying to prove who started it.  Was it the west and their arrogance?  Was it Muslims and their aggression?  To be honest with you, I really don’t care at this point and nether should you.  What really matters now is where we go from this point.  The time is ripe for a time out.  As long as the west targets Muslims the Muslims will always target the west.  As long as Muslims target the west, then the west will always target the Muslims.  Why should Americans and British civilians live in fear?  Why should Muslims civilians live in fear just because they want an alternative system of governance rather than that chosen by Western countries?  After all, the middle east is 90% Muslim, it only stands to reason that they should have a choice to be governed by the religion they willingly subscribe to.

Suppressing moderate voices by a continuation of strikes and wars in Muslim lands gives rise to groups like ISIS.  In some circles, the ISIS options looks better and better as long as coalition bombs are falling around your house.  Moderate voices cannot hold back extremists while they are both under attack.  Back in 2013 while I filmed British fighters in Syria, there was much talk about what would happen once the Syrian regime fell.  None of it focused on returning home to launch attacks.   However in early 2014 the UK government began seizing passports, stripping fighters of their citizenship, and criminalizing them.  All without a fair (or unfair for that matter) trial.

This is an open letter to all the parties mentioned above.  The sides are all bitter enemies.  There is no question about that.  However a truce is made when it is in the interest of all concerned parties.  I think now is that time.  I’m sure all sides, US and her allies, Al Qaida and her allies, and other Islamic fighters with no connection to Al Qaida yet are fighting for an Islamically governed state will initially look at this proposal with skepticism to say the least.  Most truce proposals usually are at first.  However we’ve got to start somewhere.  This is a work in progress and a general call.

To: President Obama, Prime Minister Cameron, and their Allies

Successive US presidents have been predicting, investing, and working hard for the destruction of Al Qaidah.  These efforts have been going on well before 2001.  At that time Al Qaidah had much of it’s primary operations confined to Afghanistan with some small cells throughout the world.  In October 2001 US and allied forces attacked Afghanistan with one of it’s primary goals to destroy Al Qaida as a worldwide organization.  There is no question that this goal has not been achieved.  Al Qaida, in spite of the split with ISIS, continues to grow year after year.  Even the killing of Al Qaida leader Usama bin Laden did not slow the organization.  All calls for the US administration to change it’s tactics have fallen on deaf ears and more chest beating takes place in the halls of the Pentagon than actual looking at the facts with clear unbiased thinking and planning.  Terror levels continue to be raised and westerners continue to feel under threat.  Does this not make clear to you that your actions are simply not effective?  If you are serious about wanting to make your citizens feel safe then a change in tactic has to take place.  Right now Mr. Obama you stand to go down in history as the first black president of the United States of America and that is an achievement.  I myself am a black American and I know some of the difficulties you must have faced on that journey.  However if you want your legacy to really be one that history may never forget, a legacy to lend credibility to the organization who awarded you with the Nobel Peace Prize, then be the first president to lay the foundations for a cessation of hostilities between the West and Islamic fighters.  Are there extremist elements in the ranks of Islamic fighters?  Yes.  Definitely yes.  Are there extremist elements within your own military and civilian administration structure?  No question about it.  However your current actions and strategies are manufacturing extremists like ISIS at a geometric rate.  I believe that with a cessation of hostilities, responsible Muslim entities are well able to take care of groups like ISIS.  Israeli PM Yitzah Rabin said: “We make peace with our enemies, not with our friends.”  Taking that step won’t show that you are a weak president.  Actually it will show that you are your own man and indeed you are working hard for the good of the American people and not the other way around.

Your numbers continue to swell every year.  US efforts to destroy your group by killing your leadership has failed.  What has to take place now is a change in tactics on your end as well.  If you continue with your current tactics you may one day overcome your enemies.  However that day does not appear to be on the immediate horizon.  Is war the only path to take?  A continuation of the current status quo of an ongoing war with the US and her allies will see the deaths of millions upon millions of Muslims worldwide.  More than a million have lost their lives in Iraq.  250,000 in Syria.  We have yet to talk about the numbers in Afghanistan and many other places.  This is a very high price to pay.  Success may come but is it absolutely necessary that the death toll be so high?  Is there another way?  Al Qaida supporters will blame you for seeking peace with the west but then again they will be the same ones to enjoy the peace once it is established.  You owe it to your people to explore the options.  The Messenger of Allaah, peace and blessing be upon him, entered into the peace treaty of Hudhaybiya because it was within the interests of the Muslim nation to have a cessation of the hostilities.  He is an excellent example to follow.

If you do not look favorably upon the idea of ceasing a seemingly endless protracted war with your enemies then you may see your balanced methodology give way to extremism, your fighters leaving your ranks to join those who are only thirsty for blood and whom do not mind killing many innocents both, Muslim and non Muslim, in the process.  A truce with the west would free you to deal with the likes of Bashar Assad, ISIS, and the likes of them.  You have sway with Al Qaida personnel even though you are not a part of them and do not agree with some of their tactics.  You must use that influence to encourage others that a treaty with those who oppose Muslim interests is in the best interest of more than a billion and a half people.

Muslims have a right to govern themselves however they see fit.  Westerners are governing themselves in the way they see fit.  The two may never agree as to what is “good for their people” however the reality is that moderate voices on both sides need to stand up now before it is too late.  Western citizens are paying a heavy burden to finance these wars.  Is it perhaps those resources could be turned in another direction like social services instead of confining them to a “War on Terror” that literally has no true definition so there is no way to know who is winning and who is losing?  So how will you know when to stop?  Muslims have endured tyrant after tyrant for many years.  It is clear that they will not accept it any longer.  Islamic fighters are a new global reality.  That also means that when there is an opportunity for Muslim guns to go silent without placing your cause at risk then that opportunity should be seized.  While there can be no alliance between the West and the Islamic factions, there is everything to gain for all sides to agree to a one year cease fire.

A Disabled’s Letter to Charlie Hebdo: Prophet Muhammad as a Disability Advocate 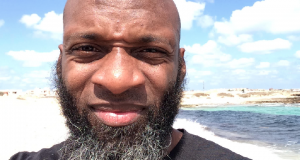 Why I won’t Condemn the Charlie Hebdo Killings

Terrible Killing is Coming if we All Don’t Start Talking