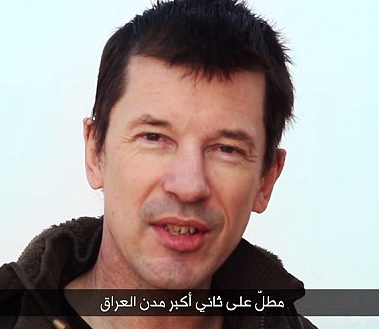 John Cantile is a British photo journalist who was captured in November 2012 and is a prisoner of ISIS.  He appears in a new propaganda video that features him moving around in and around the ISIS stronghold of Mosul, Iraq.   He made reference to his stated claim of a “normal life” in the city approximately 6 times in the first 3 minutes of the video calling the viewer to the purpose of the production which is to say that all is well in Mosul.  He went on to say:

“Life here in the city of Mosul is business as usual”

“…going about their daily business”

He mentions several times how the media is working hard to portray a different picture. “The media likes to paint a picture of life in the Islamic State as depressed, people walking around as subjugated citizens in chains, beaten down by strict, totalitarian rule.

“But really, apart from some rather chilly but very sunny December weather, life here in Mosul is business as usual,” said Cantile.

Normal life in Mosul.  Normal statements from a journalist.  It all seems so normal, except for one abnormality.  The journalist is a prisoner of the group he is speaking so highly of.  It almost makes one wonder what is the point of these propaganda videos.  Who is their target audience?  I cannot believe that they believe their skeptics would be swayed by the testimony of a prisoner being escorted by his captors.  One scene in the video shows Cantlie on a police motorcycle going around town.  He said, “It seems that the police are almost redundant in spite of having a firm presence here in Mosul.  There is very little crime being committed as far as I can see.”

His statement here might be believable if one of his captor wasn’t riding behind him with an AK47 strapped to his back.  Even their fan base and supporters cannot seriously think that propaganda videos so outwardly biased is of any use.  If the kidnapper was North Korea, for example, instead of ISIS and the prisoner was paraded as Cantlie is, we would all look at each other and wonder to what level of education premier Kim Jon Un really has and whether he cheated on his high school equivalency exams.

Cantlie’s father passed away with his son in captivity in October of last year.  He made a plea to his captors in the following words: “To those holding John, please know that he is a good man. He sought only to help the Syrian people and I ask you for all that is sacred to help us and allow him to return home safely to those he loves and those who love him.”