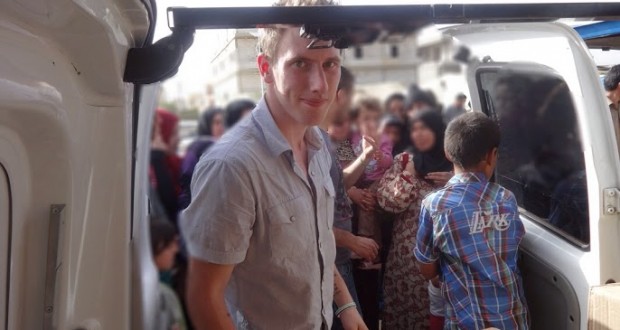 Abdul Rahman Kassig, may Allaah have mercy on him, was murdered by Baghdadi’s group and displayed on television.  Kassig set up field hospitals and operated on those who needed it.  Both fighter and civilian.  He did more for Islam and it’s people than so many others.  Today the sadness I feel really isn’t for him.  He got what so many Muslims want; to be a Martyr.  I ask Allaah to accept him as such and reward him.  Ameen.  I feel sadness for his family who had to see their suffering go into a new phase today by hearing of their son’s death, and especially in such a gruesome fashion.  What must they think of Islam and it’s people?  “My son went to help these people and look at what he got”, they must be saying.  To them I would say that their son did not die for nothing, and there are over a billion people who are praying for your son, our brother.

If there are any ISIS supporters out there who may be confused about this issue. because you feel that you trust ISIS and they “know” what is going on, I would say listen to the words of the Prophet, The Messenger of Allaah (Salla Allahu alaihi wa sallam) who said: “Allah will never allow my Ummah to unite upon misguidance and incorrect beliefs.”  -At Tirmidhi

This above statement doesn’t refer to the average Muslim, this refers to the people of knowledge.  I ask any ISIS supporter to name me 3 known people of sound, known knowledge who support ISIS.  I know of NONE.  I am not simply referring to Shaykh’s who appear on TV I am referring to any Shaykh of reputable knowledge.  Even with the Taliban movement there were some people of clear knowledge who supported them even though it wasn’t popular to do so at that time.  We cannot simply dismiss EVERY SINGLE person of knowledge and simply hold fast to our desires.  The issue of ISIS isn’t even an issue of a difference of opinion amongst the people of knowledge.  Would you feel comfortable appearing in front of Allaah knowing this hadeeth and explaining to Him why you chose to ignore a total consensus amongst the people of knowledge on an issue?  Or will you simply say: “All of the real scholars are in prison and can’t speak”.  So then you would have no trouble telling me who that “real scholar” is who is in prison and shares your opinion.  What is his name?   Unknown.  Just empty talk.  Here is real talk:

“Allah will never allow my Ummah to unite upon misguidance and incorrect beliefs.”

Did you think that Allaah did not know we would be facing this issue when he had his Prophet utter these words?  Of course he did!  And He gave us the map out of this mess.  Our people of knowledge have lots of problems and issues.  I will be the first to admit that.  However a consensus is something that cannot be ignored.  Unless someone is willing to say that the Messenger of Allaah did not understand?  Anyone willing to go there?

Do any of those who are ISIS supporters even know who these “scholars” are that ISIS says they consult?  Does anyone know who they are? This is the mentality and lack of transparency that has hurt Muslims for so long.  Secret “ahlul hal wal aqd” (people of influence) who elected Baghdadi, secret “scholars” who only go by a kunya (Abu So and so,), etc.,  even the leader himself is an unknown individual who is unknown to virtually everyone around the world except his inner circle and even they are unknown!  Enough.  Perhaps it isn’t for the average Muslim to know all internal affairs of a movement however I spent time during my filming with many of the major commanders in Syria and NONE of them had any idea what Baghdadi was doing either or why they murdered and tortured those that they did.  And these are people who were and still are on the ground.

I hope this is a turning point.  ISIS growing strong does not mean victory for the Muslim ummah.  They will not hesitate to kill any Muslim, like Abdul Rahman Kassig, who gets in their way.

Previous: Syria and Iraq: The Future Prospects of Jihad (Video Debate)
Next: What We Learn From ISIS List of “Scholars” Part 1